Sometimes things don’t work out even though careful planning took place. We did the best we could but we weren’t able to finish our trip as we had been dreaming of doing. “Things happen.” Could that be my accumulative wisdom from 75 years of living?

The last important place we wanted to visit on this trip was the west side of Glacier National Park in Montana. We have been looking forward to riding the Red Bus on the Going to the Sun Road up the west side since we took the bus up the east side a few years ago. I booked three nights in the newly opened RV park right outside the park entrance – that turned out to be the best part of our stay.

As we neared the park, the skies grew darker, the clouds hanging low over the mountains threatening to leak, just a little bit. Jim was struggling with the beginnings of a cold, and I was too tired to cook something from the freezer so I asked the young people in the office if the cafe on the corner of the road to the RV park was good. We went and had one of those meals that brighten the spirits. We split an elk burger, a new meat for us, and some healthy and not-so-healthy sides, the waiter was good, and the atmosphere was warm, comfortable with good music in the background, allowing us to share our ideas about our next few days.

As it turned out there wasn’t much planning to do. After trying online to book seats on The Red Bus tour, I gave them a call. There were no seats available on either day except two on the 8-hour trip that covers both the east and west road. I declined those seats because by this time it was about 45 degrees F (feeling like 38), with almost steady rain, the clouds covered the mountains half way down, Jim was really feeling bad, and I was getting an “intermittent” sore throat that let me believe my immune system would block whatever Jim had even though we were sharing the close quarters of the camper (never more than 12 feet apart) or sitting beside each other in a truck cab. I chose to believed this because we didn’t share silverware or toothbrushes.

Yes, it was providence that we couldn’t get tickets because the next day I had a fever and my joints were so sore I could hardly walk the 6 feet to crawl into bed. Our only conversations were about what OTC seemed to work best for which symptoms and did we have enough to get us to tomorrow. We were two sick puppies. Jim is holding to his story that he had a cold because he is still coughing, I know I had a respiratory flu because in three days I felt quite good. Good thing neither one of us has a high investment in being right, at least not any more. They are just our stories and we are sticking to them.

When we woke up Thursday morning the sun was shining, we could see the mountains and we felt good enough to hook up the truck and start for home along Highway 2. I was even able to get some beautiful parting shot as we were leaving Glacier, including this beautiful barn that was in a landscape photo I posted a few days ago.

Don’t go far, I have more of this story. 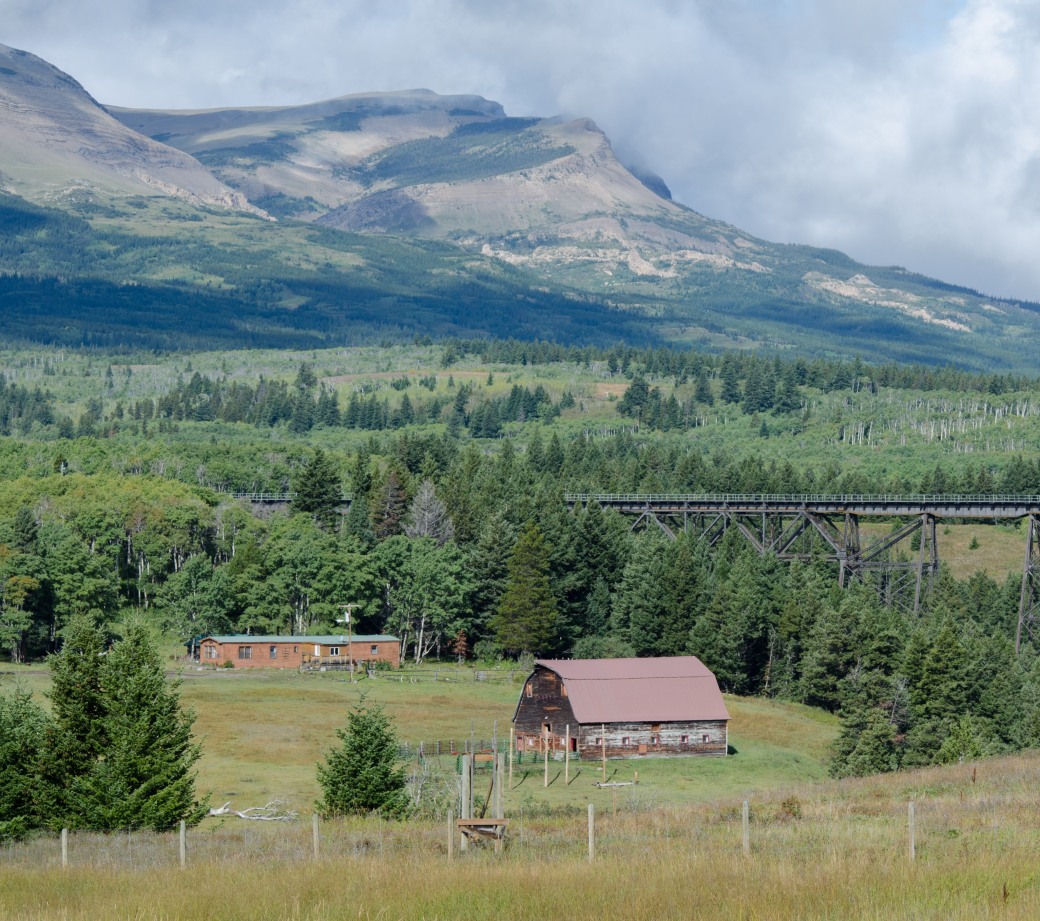 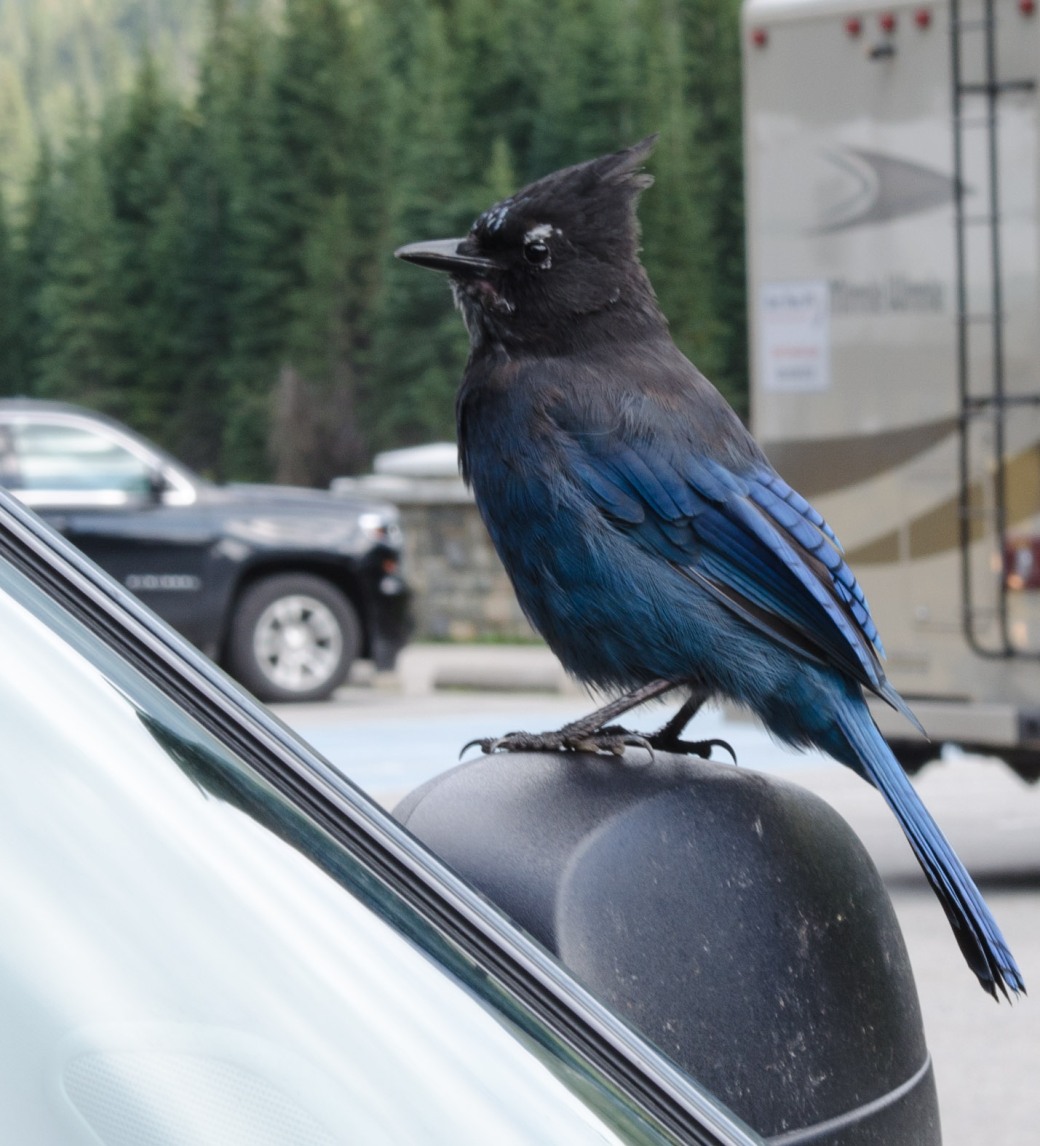 We pulled into the parking lot of the Visitors’ Center at the Summit of Roger’s Pass in the Glacier National Park where I encountered an unfamiliar bird. A Steller Jay up close and personal – on my rear view mirror.

There were two, flitting around but with no weariness of me and my camera. The one above seems to be an adult and the other was maybe her little one and they were practicing independence.

The young one still had down that she had all fluffed up at one point and her coloring was gorgeous. 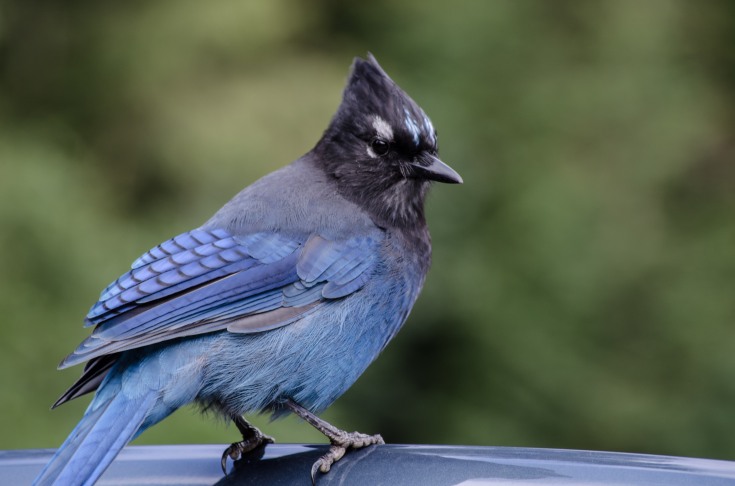 It did feel like we were going to the sun when we traveled up through the mountains on our way to Logan Pass and down the other side on Going-to-the-Sun Road in Glacier National Park. The day was beautiful but the air was full of smoke from a forest fire in southern Montana, more so in some areas of the park than others. Here are some of my favorite scenes. 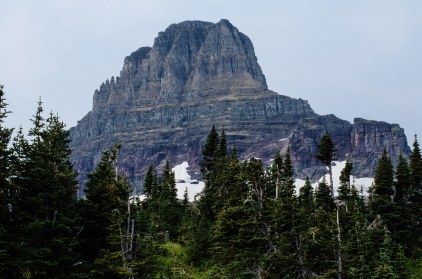 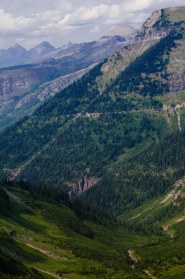 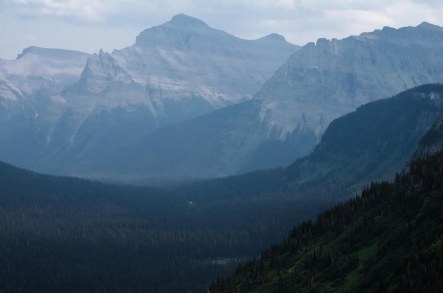 We camped several days at St. Mary’s on the east side of Glacier National Park. We were almost surrounded by mountains and had a beautiful sunset show every evening. Even though the sun went behind the mountains well before sunset, the evening glow would be reflected on the eastern mountains when the clouds turned navy and pink. Every night it felt like a brand new surprise.

You can see Cee’s beautiful pastels and post some of your own by visiting Cee’s Fun Foto Challenge: