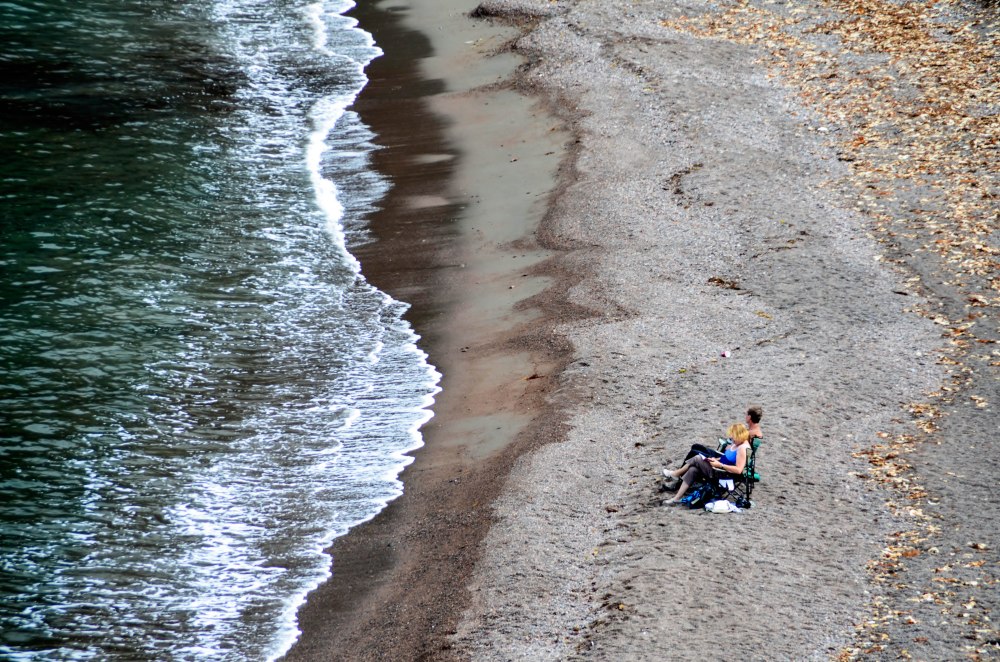 Sunbathers on beach at Meat Cove

Looking down on the beach at Meat Cove on the northern shore of Cape Breton Island, Nova Scotia Canada.

You can see more takes on “From Above” at:

This image was taken at a small bay off Bay Saint Lawrence on the Cabot Trail at the north end of Nova Scotia in Canada. We were told that this wooden boat was hand made and it was a beauty. When I look at this photo I remember a sense of calm and peace and joy that comes at the end of a day well lived.

Alisia’s travel theme of the week is texture – what fun.

I have been going through my photos taken during our trip to the Maritime Provinces of Canada and wondering how to use those that I enjoy but haven’t fit into any of my themed posts. Enter Alisia’s theme.

I love this one because of the various textures that frame the texture of the jutting rock. This was taken at Meat Point at the north end of Cape Breton Island, Nova Scotia. 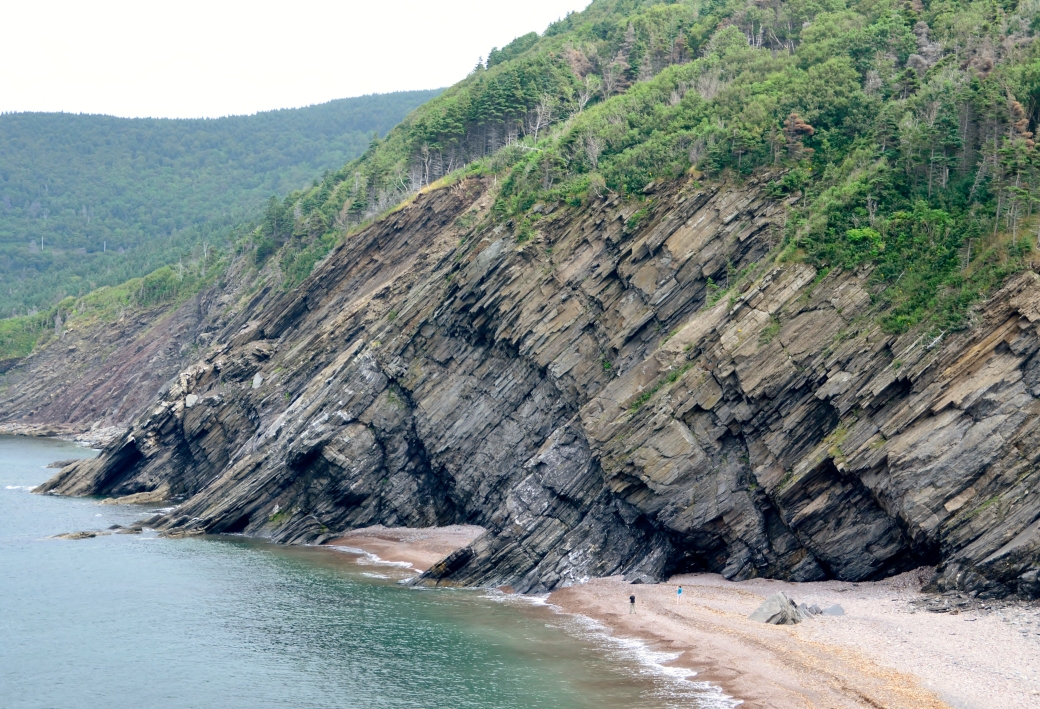 Of course in the Maritime Provinces, the primary themes are the contrasting textures of land and water. The next two Photos were taken from a boat off of North Point at the northern most part of Cape Breton Island. 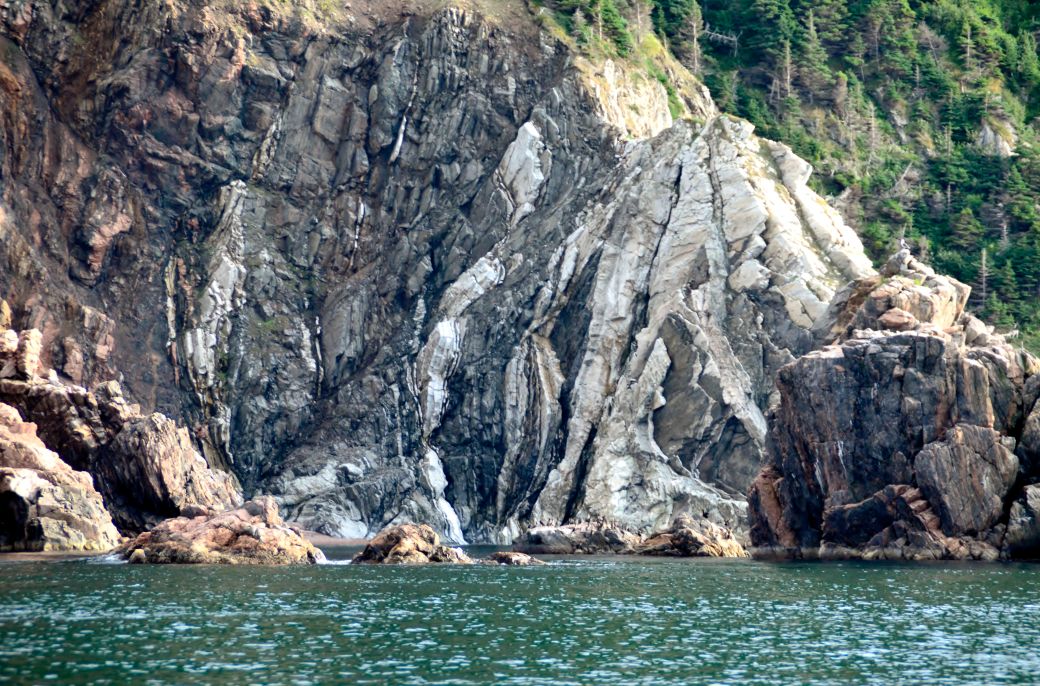 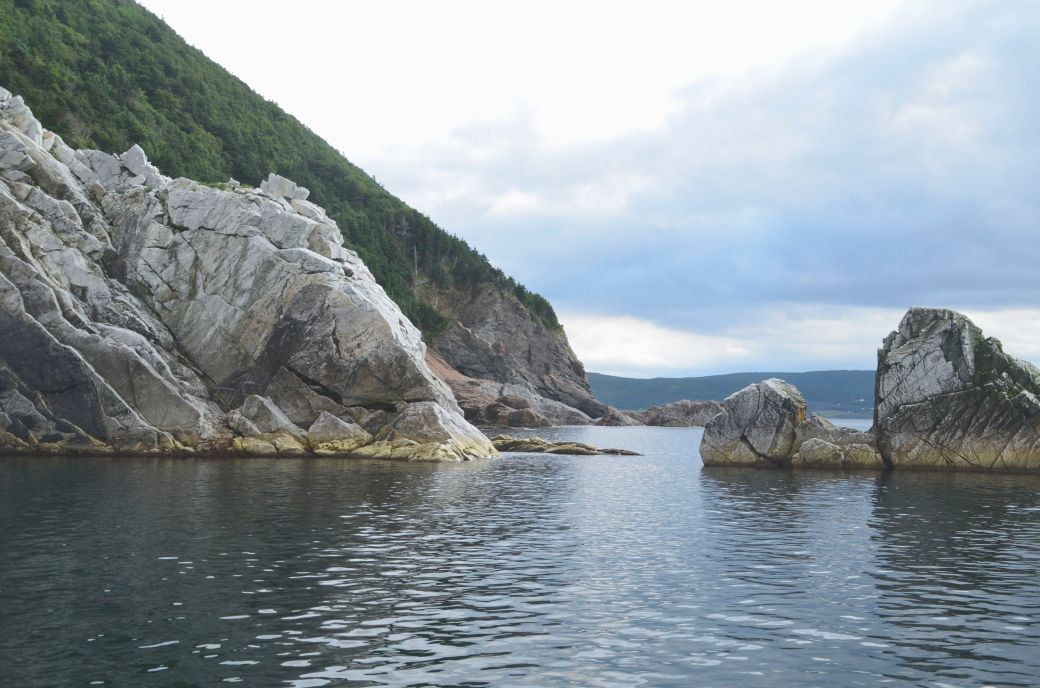 In these photos, the textures of land and water meeting is deceptively calm, but the hardness of the rock says that it can meet the force of water with firm resolve creating a tempest of texture in our imagination.

The next photo is from the mouth of the Bay of Fundy when the tide is going out. The color created by the varying depth as the water level lowers creates new textures on the water. How much softer the meeting of land and water is here. 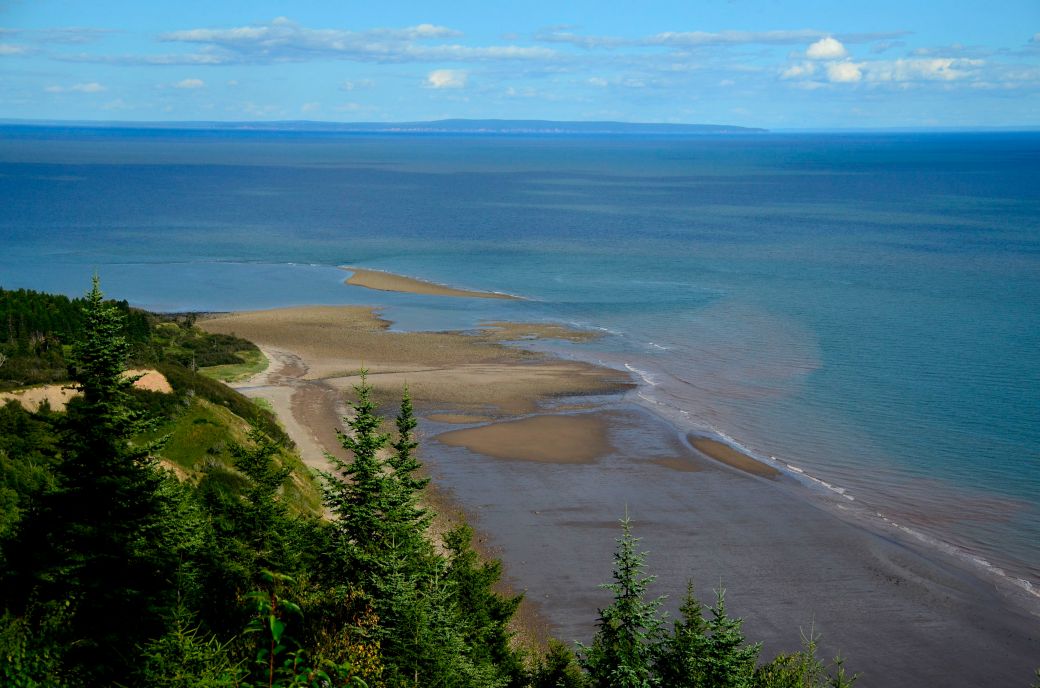 This last scene is of the mouth of the Saint Lawrence River in Quebec. The soft textures of sky and sea meet with only a hint of land between. 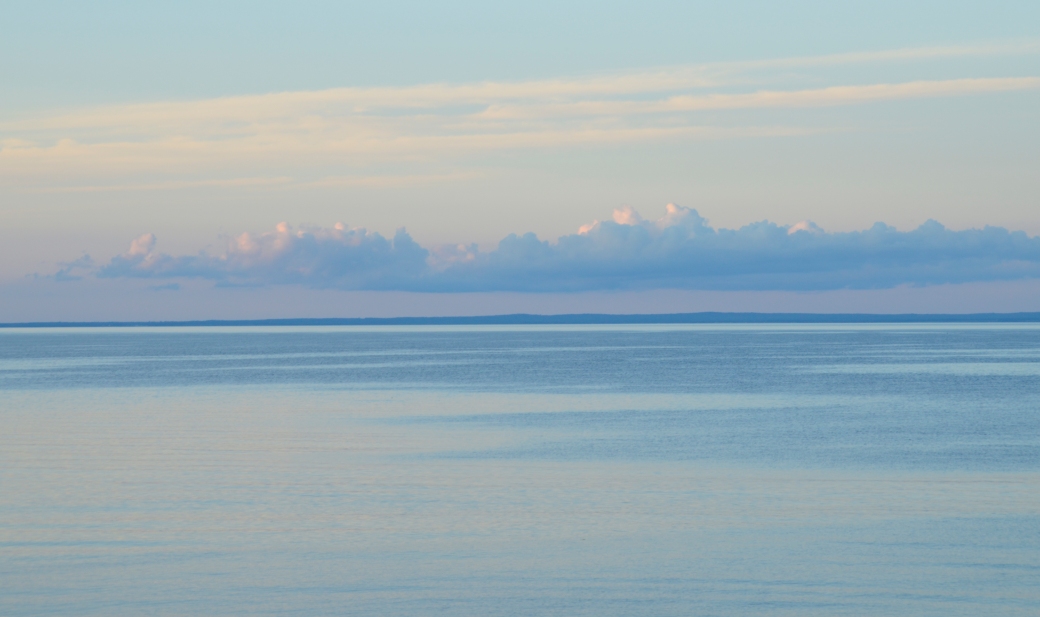 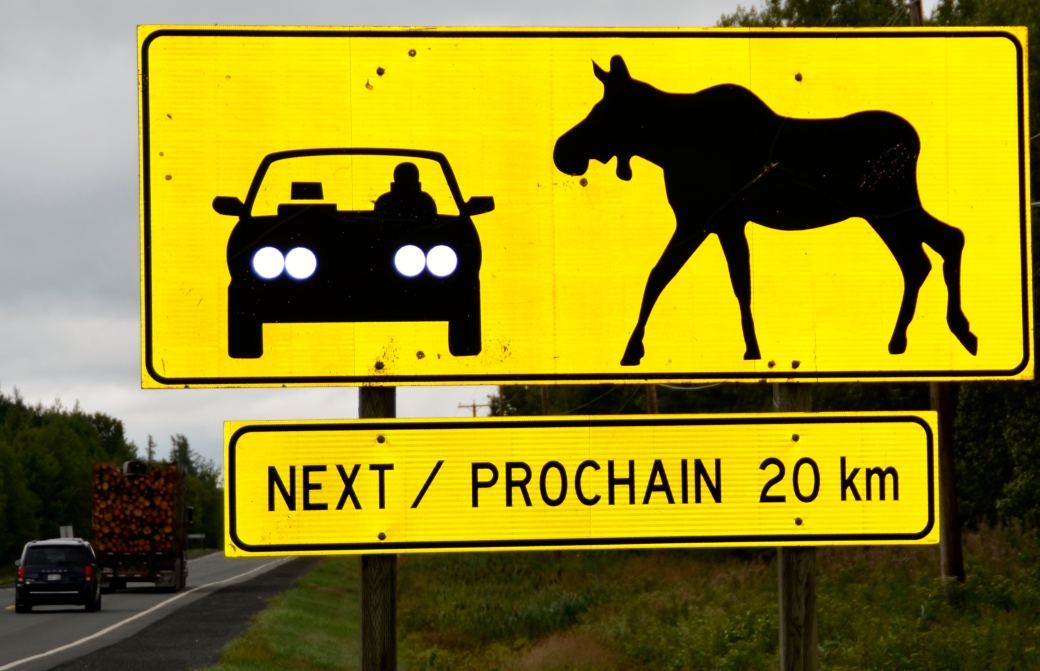 Watch out for Moose

We saw a moose – on date night on the east coast of Cape Breton Island. It was dusk and we were driving back to the campground and there she was. She lumbered down the left shoulder and across the road but my camera was behind the seat and she was in the woods before I could get it out. But we saw one – honest.

Traveling up the west coast of Newfoundland and through Gros Morne National Park we saw these signs – but no moose. Funny sign.

When we reached Port au Chroix, the place where we had decided we would turn around and head back, we had hit the weary-of-riding-in-the-car-and-we’re-hungry point but it was only 3:00 in the afternoon.

Port au Chroix is a charming town, where fishing is the primary industry. And right there is this cute cafe all decorated in a nautical theme advertising good food using locally grown products and local information – just begging us to come in. No discussion needed; I was driving.

We had been told that there were restaurants on Newfoundland that served moose burgers and on a chalk board by the front door was a sign saying they were “out of moose burgers.” But it was only 3:00 and we weren’t ready for a moose burger anyway. I decided on a piece of partridge berry pie with ice cream and Jim ordered blueberry pie, both with ice cream and big cups of very good coffee (with 18% coffee cream). Here is what we learned from our waitress as we were oohing over our pie.

Our first question was what is a partridge berry. She explained that in other parts of the world they are called lingenberry and they taste something like a cranberry. My pie had the tartness of cranberry and the jam we bought later at a market selling wild blueberries is really good on toast.

Our second question was about moose burgers. They weren’t gong to serve moose burgers during the 13 days left of their summer season because they were out of meat. The owner has a license to hunt moose and also a license to serve moose in his restaurant. He kills it, butchers it, grinds it and serves it as moose burgers. Now we normally eat beaf burgers, occasionally a turkey or chicken burger, or a vegi burger and sometimes we get a buffalo burger at a local restaurant. Some local people in Michigan are raising and selling buffalo meat. We would have liked to try a moose burger, but not to be in Port au Chroix.

We didn’t find anywhere that served them on Newfoundland (maybe because we didn’t search much) and when we were pumping gas (again) in Nova Scotia we asked someone if there was anywhere in town that served moose burgers.

She explained that it was against the law to serve it in restaurants in Nova Scotia but she grew up eating it; when food was low, her dad went out and shot a moose. It was the standard Sunday dinner. No moose burger on this trip.

There were a couple of places along the highway where we saw a sign saying that there was a moose in the road when the lights were flashing. Then there would be poles just off the shoulder every few feet with solar panels and little things on the top that were probably motion detectors. There were also places where they had very tall moose fencing running parallel to the road. We saw our second moose eating shrubs just the other side of one of these fences. We couldn’t stop for a picture because there wasn’t sufficient shoulder and besides taking a picture of a moose through a medal fence would make it look like an unimaginative picture from a zoo.

Fast forward a few days and we are leaving New Brunswick and entering Maine. The U.S. customs officer wants to look in our trailer. After checking the frig, he poked his head in our bath (all 4×5 feet of it) and asked if we had a moose hanging. Too bad I hadn’t hung my moose ornament I purchased in St. John New Brunswick. And this is my picture of a moose from the Maritime Provinces of Canada. He posed for the picture. 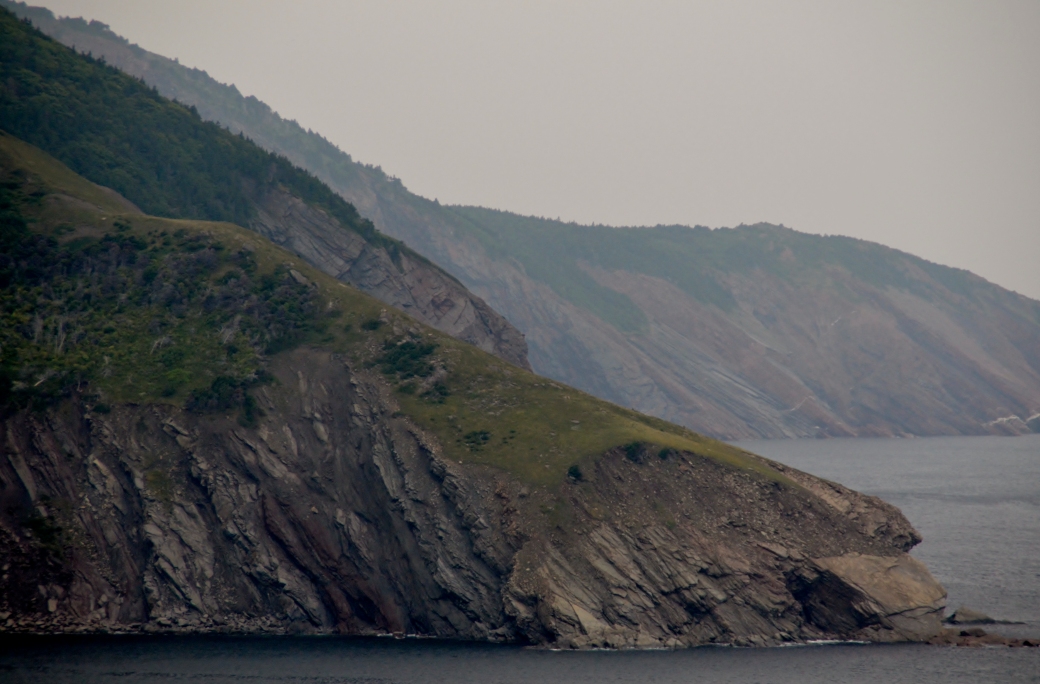 My story today requires that you stop and take a couple of very deep breaths as you forget about the noise and demands of everyday life. We decided to take the gravel road out to Meat Cove while we were waiting to go whale watching. We used to like to take the fire trails in the very north of Michigan’s Upper Peninsula in search of ghost towns and this rekindled that sense of excitement about what was around the next bend. 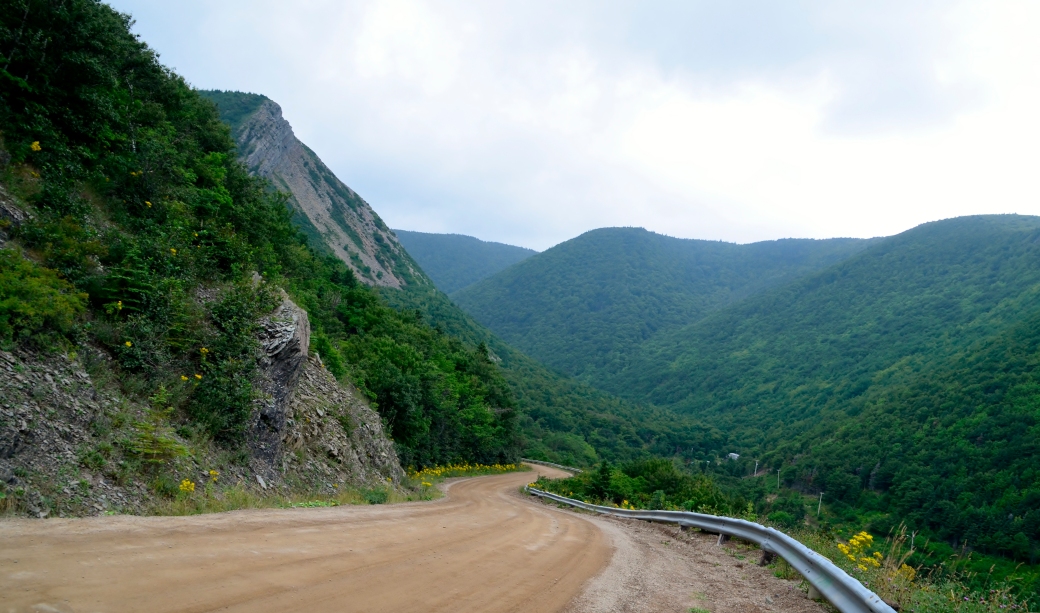 There were a few houses, but mostly peeks at the ocean and mountains and cliffs. And wild flowers along the edge. As I was taking some pictures of flowers, my husband found a few wild raspberries that the bears hadn’t eaten.

He shared and they were bursting with flavor – both of them because he only found four.This is where I found the butterfly and here is another pose. 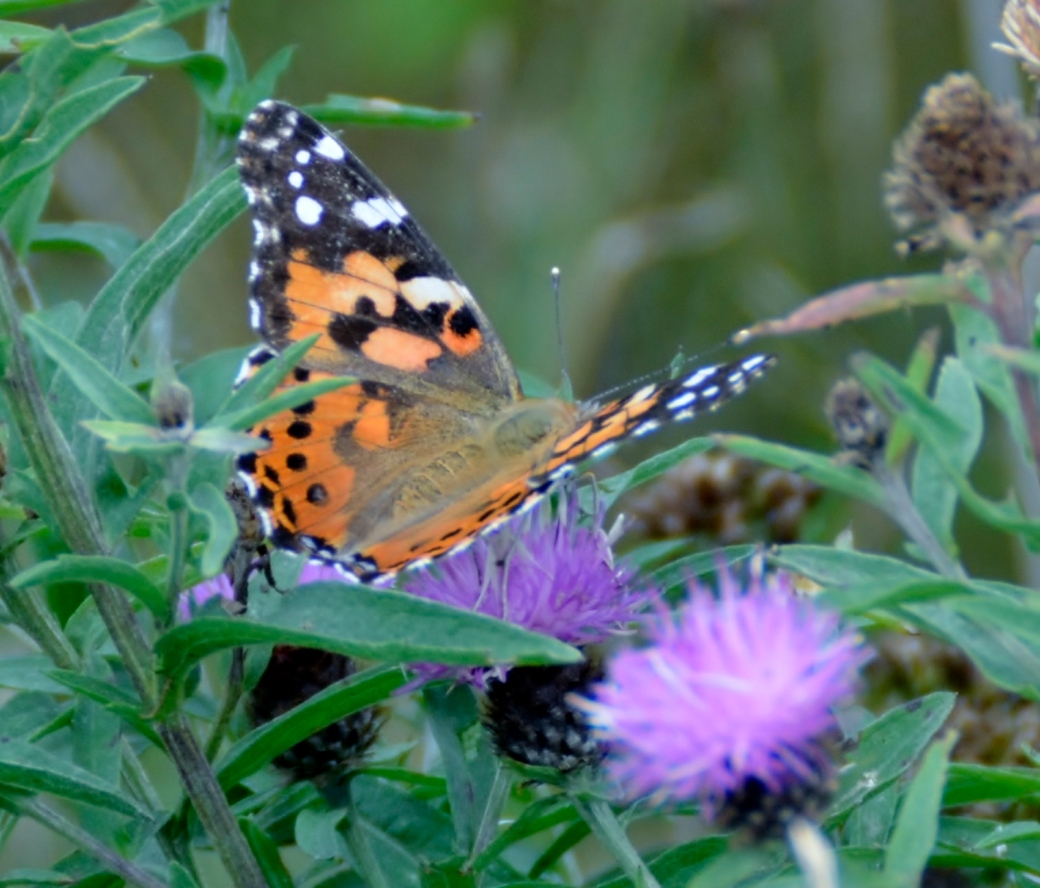 The road ended at a field with picnic tables that overlooked the beach. 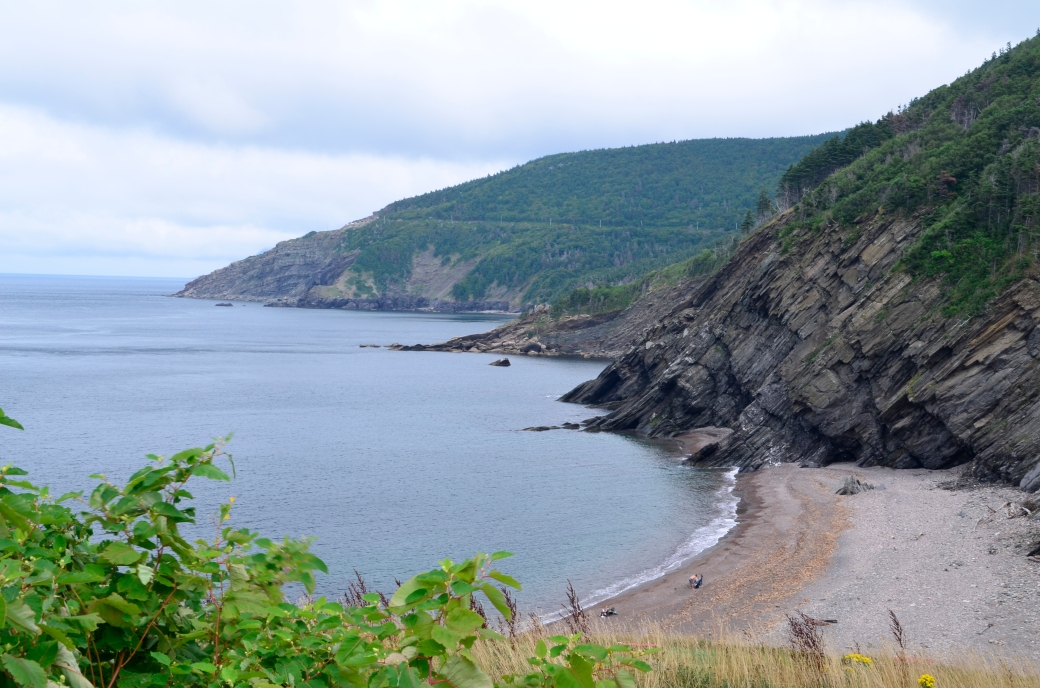 Not the normal beach where you sit and watch people. Although there was a couple soaking up the warmth of the sun. 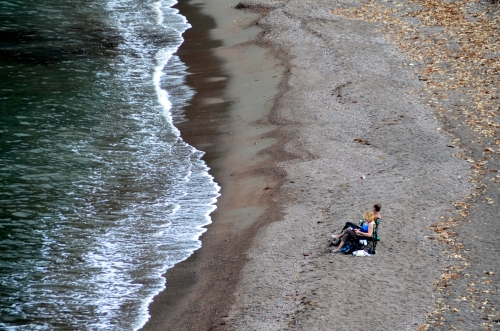 And kids doing what kids do when they don’t have electronic games and toys. 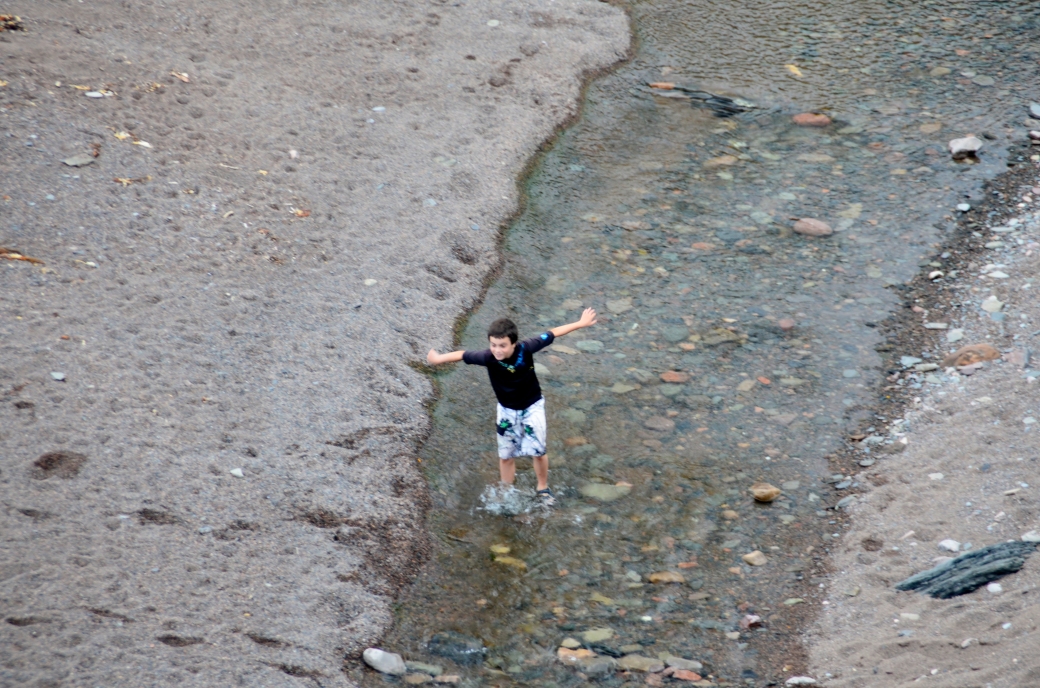 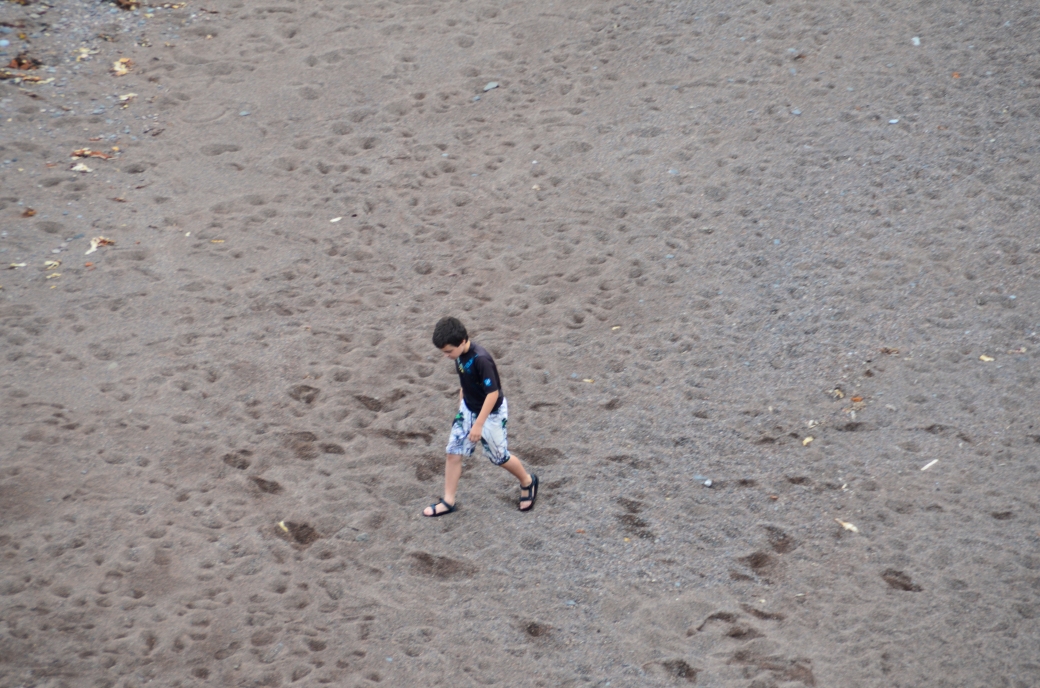 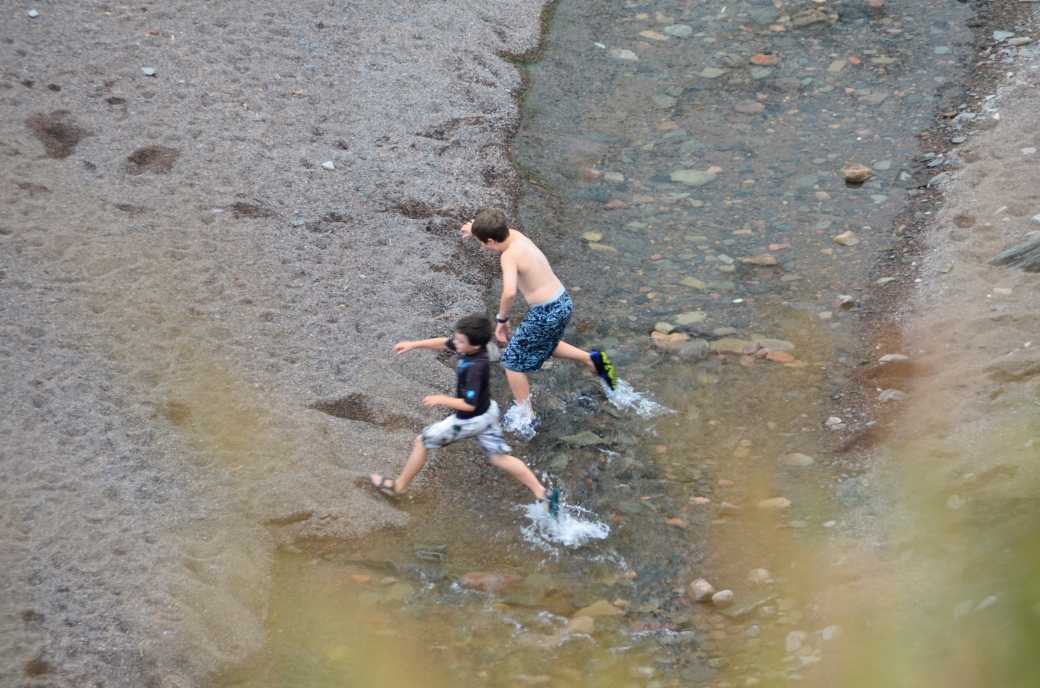