I’m still fascinated by these split rail fence – this fence is on Manitoulin Island in Ontario, Canada but I have also seen them along the Blue Ridge Mountain Parkway in the Eastern U.S., also a rocky land with thin soil. This is not a photo I used in a previous post on these fences, because of the chain-link […]

We saw a lot of these split rail fences as we drove down lots of roads to get to destinations unknown. JB said he remembers seeing these fences as a child when he and his father visited his great uncle’s and great cousin’s farms in the Durham, Ontario area. They were everywhere – on working farms, along the side of roads with no farms in sight, along the road with the woods creeping to overtake them. Some were fairly new and well maintained while others were in states of disrepair. And there was a variation of this split-rail fence. I have a fascination with fences, I like their beauty but it isn’t a political issue where I believe land should be divided and fenced instead of allowing for free-range. I can’t come down on either side – but I appreciate good fences that are aesthetically pleasing and/or functional. These were functional. As we drove and I observed the rocky fields I realized that a good portion of the island has very thin soil so it is impossible to dig post holes deep enough to keep a fence standing. Thus the people solved their problem by designing fencing that could support itself above ground. Another version of the second set of fencing is to build the triangle with two sides connected to the upright post and put large rocks on the side that lies on the ground. They used what they […]

Morning on the Bay

My goal was to be up for the sunrise at our campsite on Manitoulin Island, on the water of Manitowaning Bay, just south of Sheguiandah. I feel the tug of the yarn that wants to unravel my story of exploring this island with multiple First Nation tribes but my topic sentence has tethered me to the early morning. Our […] 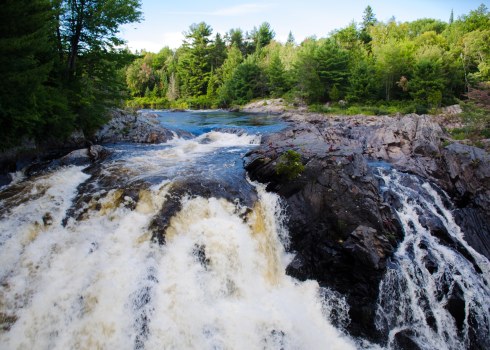 I was surprised by the number of water falls we found as we traveled along the eastern side of Georgian Bay in Ontario, Canada. We had endured over a week of rainy weather that had a silver lining as the water falls were swollen. Is I felt the mighty power of the water, all I could think of was canoeing […]