It was a steamy visit to the Naples Botanical Garden on Tuesday but after not going my first two Tuesdays in Florida because of heat and humidity I decided I couldn’t stay away another week. The temp was in the high 70’s when I arrived at 8:00 am but it felt like 90’s. It didn’t take long for sweat to run down my face and neck and for my capri pants to cling to  my sweating legs – not a very lady-like description of my body. I usually don’t tolerate these conditions well or for long. I told Jim, when I left the condo, that I probably wouldn’t be out long – never suspecting I would stay three hours. Three hours of pure sweaty joy.

My excitement and anticipation was because of the International Waterlily and Water Gardening Society’s 2019 New Waterlily Competition beginning in our garden last June and I have been receiving lots of reminders to vote for the one that should be added to our permanent collection. I was expecting the water lily competition/show to be like other flower shows; the growers grow the flowers, fertilizing them so they bloom at precisely the right time are artfully arranged for all to see over a short period of time. This competition wasn’t happening like this so I was having to learn a lot of new information about how lily competitions work while I was still hanging on to my belief that they would all be on display for the judging in October.  I headed straight to the area where the lilies were being displayed. 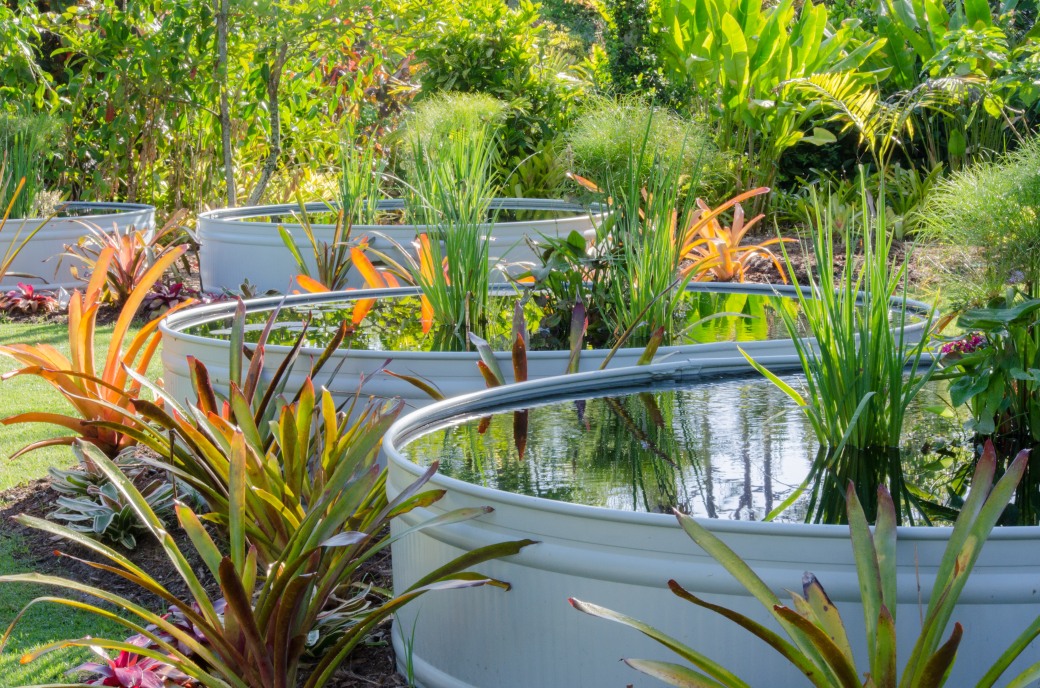 These new breeds of waterlilies were planted in 6 specially-ordered tanks set up in The Grove. The tanks are 10 feet in diameter, each holding approximately 2 feet of water. But this wasn’t their beginning here. It began with hybridizers working for up to years cross-pollinating lilies to create new genetic characteristics. In May, 2019, 25 hybrid plants of the Nymphatea genus arrived from contestants around the world, beginning their visit in the aquatic nursery at Naples Botanical Garden.

They arrived as rhizomes that emerge at the end of a life cycle of the parent plant. Aquatic Areas Manager Danny lead a team of gardeners in the growing of the waterlily collection until they were mature enough to transfer to the tanks in the Garden. Naples is subtropical and the climate is suitable for growing waterlilies outdoors year-round and a favorable place for these plants to flourish in the competition.

When I arrived at The Grove, I was confused and disappointed. Where are all the lilies? I still wasn’t comprehending that this competition is different. There were three lilies blooming.

A week later only the purple one was blooming – but there were buds that will probably be blooming for my visit next week.

There was a garden employee doing some spraying not far away so I asked him if the rest of the lilies were going to be brought out. This must have been an incomprehensible question for him because he started an explanation on how the garden wasn’t allowed to propagate these lilies. After a few disjointed questions/answers, I asked if the lilies bloom at different times. Bingo – yes. I think my brain is starting to wrap itself around this process. And then I see this sign… 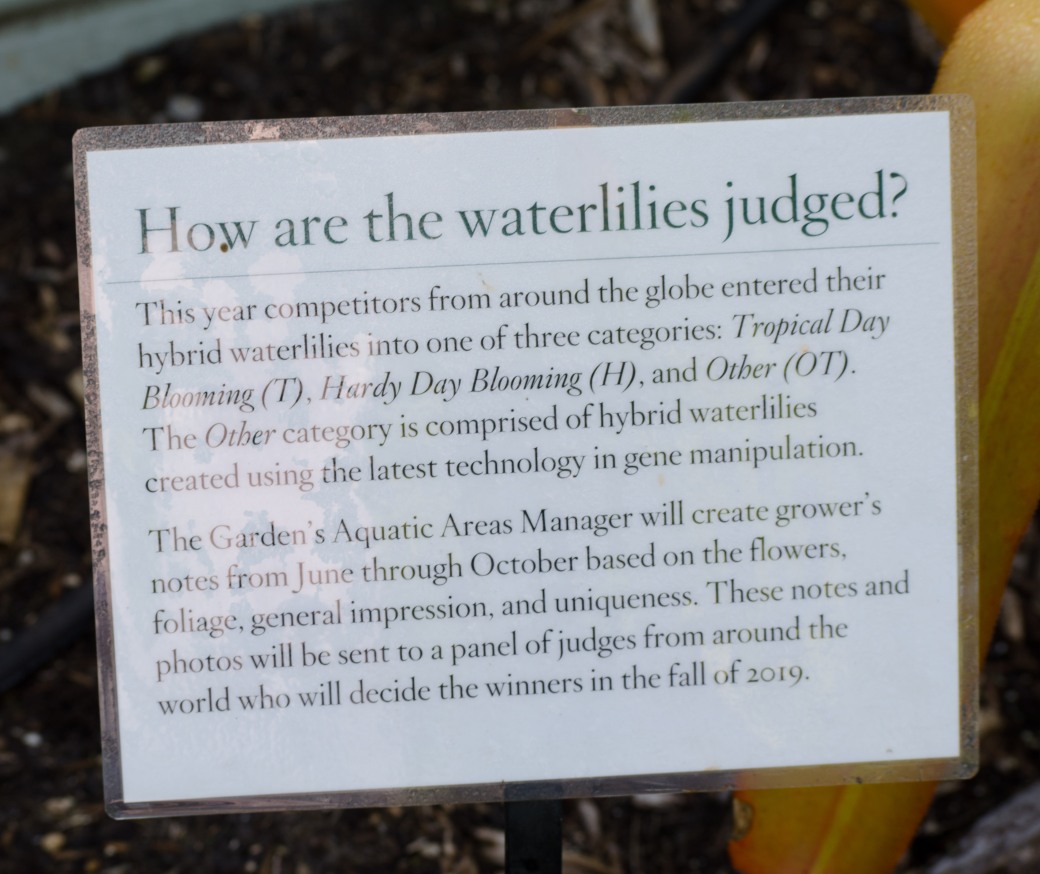 After six months of growing, the plants are being judged right now, based on notes and photos of Aquatic Areas Manager’s about how the plants performed and whether they truly are new and uniquely different from the plants that provided genetic material.

The plants have a number of chosen traits that could include the stamen, pigmentation, shape, size, and number of petals or leaves that distinguish them from other varieties in the world. (May 15, 2019 entry on Naples Botanical Garden Web Site).

I read somewhere that these lilies are going to continue to grow in the garden until 2022. Maybe more of them will bloom when I am in residence.

8 thoughts on “A Steamy Visit – But Where are the Lilies?”