Our grandson and his wife thought it would be fun to drive to downtown Portland and walk around one afternoon. I have heard wonderful things about Portland but the drive from our campground on the Columbia River took us through downtown so we could see how big it is and the traffic congestion on the highways going into and out of the city. I used to love a few days in a big city but in the past few years it exhausts me. And because of the car seats for the two youngest ones, we would have to drive – with the anxiety of not getting separated from them.

It only took a few minutes of looking at our maps and guide books to decide we wanted to take a drive south and west around Mount Hood, ending up on I 84 going into Portland. We would take an extra hour or two to take a big loop south before going through Portland to visit them. We called to tell them our change in plans and they were good with it because they were going downtown for Allie’s birthday the next day while we watched the kids. Now that is a win/win.

Highway 35 going south was a beautiful drive – good road, little traffic, curvy and hilly, with orchards and mountains and we soon learned there were lots of fruit markets. We went by a couple before I realized they were open and waiting for us; this one we didn’t pass by.

I was as excited as if I had struck gold in them-there mountains. Fresh peaches, pears, and apples. Eatable gifts to check out for people back home. And best of all, a bakery with outdoor tables to sit and savor.

We bought a couple of gift items, some white peaches and bartlett pears, and some baked goods – a cinnamon roll with marionberry (I think) jam on top, and cookies, snickerdoodle, oatmeal raisin, and peanutbutter/chocolate. We sat and ate most of the cinnamon roll and smiled as we talked. The temp was cool and the sun was warm and we decided we wouldn’t want to be anywhere else on earth in that moment.

Oh, and I took some more photos. 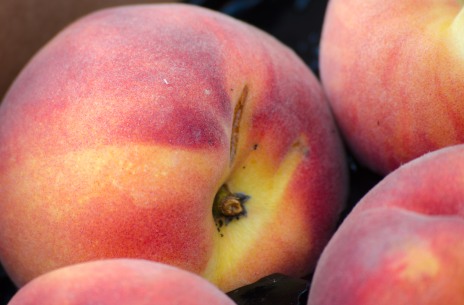 I have decided that I need to shop at fruit and vegetable stands whenever possible. Sure I enjoy the fresh foods but it also keeps me grounded. It keeps me grounded in the reality that foods don’t grow perfectly, they have marks and blemishes and some distortions. Most of what I see in the grocery was picked well before it could develop imperfections. And then the grocer works hard to display the produce so it looks perfect even though it may lack flavor. Maybe I had to grow old with the imperfections that come with aging to appreciate this bit of wisdom.

When we reached US 26 to go west we were disappointed. The ambiance changed to more traffic, semis, and faster speed. We did see one last look at beautiful Mount Hood. 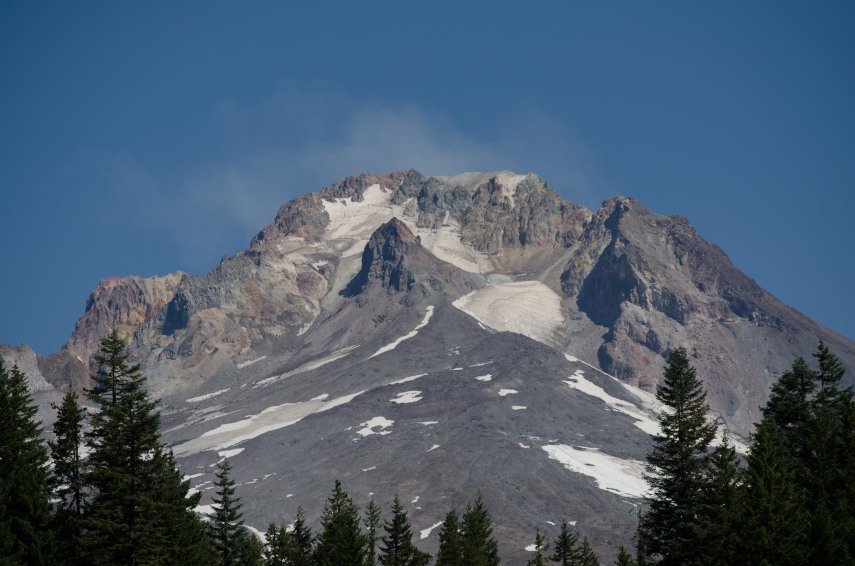 Mt. Hood is 11,239 feet in elevation and considered an active volcano.