I am drawn in by trains, probably because my Polish grandfather worked at the rail yard, living a block away because he had to walk to work. I saw lots of trains when we visited – waiting for long trains to clear before we could cross the tracks to get to their house. The town where we lived in lower Michigan was a major rail hub with rails radiating out in all directions.

As we drove Highway 1 (Trans-Canada Highway) west from Lake Louise, we needed to pull in when we came to the spiral tunnel at Kicking Horse Pass. When I exited the truck, trees blocked my view but I could hear the rumble of trains below and the screeching of breaks. We had seen a spiral tunnel before so I knew what was there for my camera to capture but I had to get to the clearing. There it was…

Kicking Horse Pass is a high mountain pass (1627 m, 5339 ft) going across the Continental Divide in the Canadian Rockies, the Alberta and British Columbia border (Wikipedia). The Trans-Canada Highway and the railroad cross this pass, connecting the east coast with the west. Driving the Trans-Canada Highway through this pass is breathtaking with high mountains and steep grades. But this is about the trains.

British Columbia joined the Canada Confederation in 1871 on condition that a railway be built connecting British Columbia with the east coast. The biggest obstacle was the Rockie Mountains. Several passes were considered but the Kicking Horse Pass was chosen because it was the southern most, close to the US border, and the most direct link between east and west. It required the least amount of work and material, but it was also very challenging.

There was a lot of pressure from the government to get the railroad built so the engineers weren’t free to find gentle declines – instead the government temporarily allowed a 4.5 percent grade. The first train to go over the pass in 1884 lost control on the way down and crashed, killing three train workers. Because the danger was so high, side tracks were built for runaway trains which were the default, with the switch being turned for the train to continue down only when the switchman was sure the train was under control. This was a crazy dangerous train ride!

The solution for safer travel was the Spiral Tunnels designed by J.E. Schwitzer, one of the railway’s Assistant Chief Engineers, modeling them after a system used in Switzerland. The initial rail bed had been used for 25 years but were abandoned in 1909 when the Spiral Tunnels were completed. The Spiral Tunnels were a great improvement for the grade, this is still a challenging rail line because of rockfall, mudslides and avalanches that continue to be threats from nature. 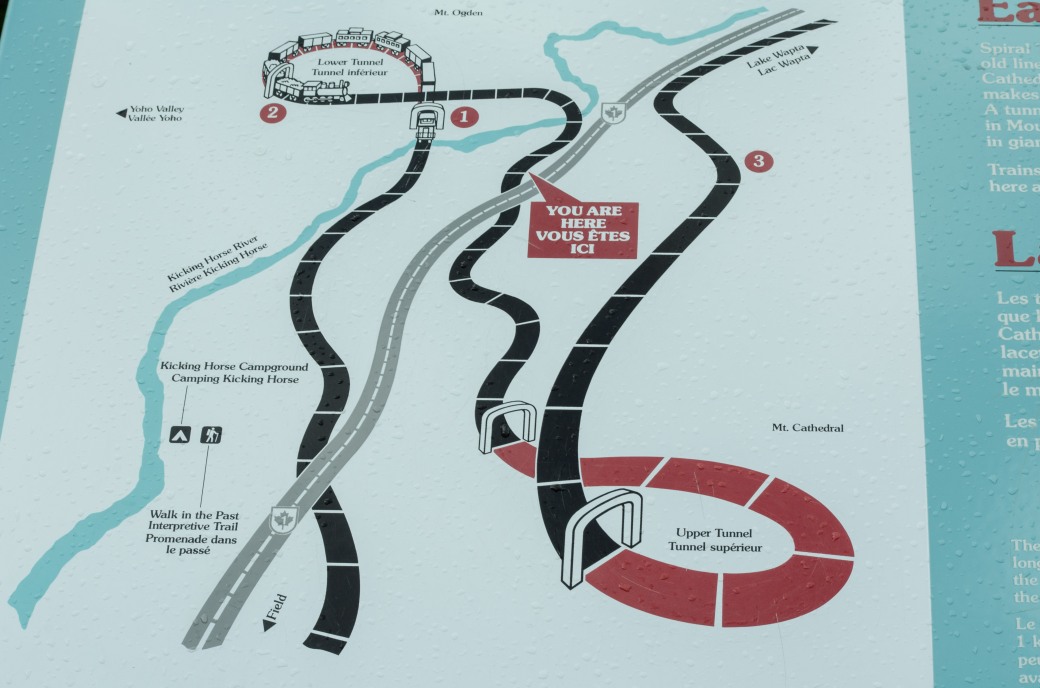 The train we saw came from the west (upper right corner of this diagram). It had gone into the higher tunnel we couldn’t see (lower right of diagram) traveled 0.6 miles (991 m) through the tunnel and emerged 56 feet (17 m) lower. It crossed under Highway 1 and over the Kicking Horse River entering the Lower Spiral Tunnel in Mt. Ogden. It went 0.6 mile (891 m) and emerged at 3 on diagram (bottom of my photo) 50 ft. (15 m) lower.

Information for this post came from the following sources:

Information Center at the pull-off on Highway 1 in British Columbia.