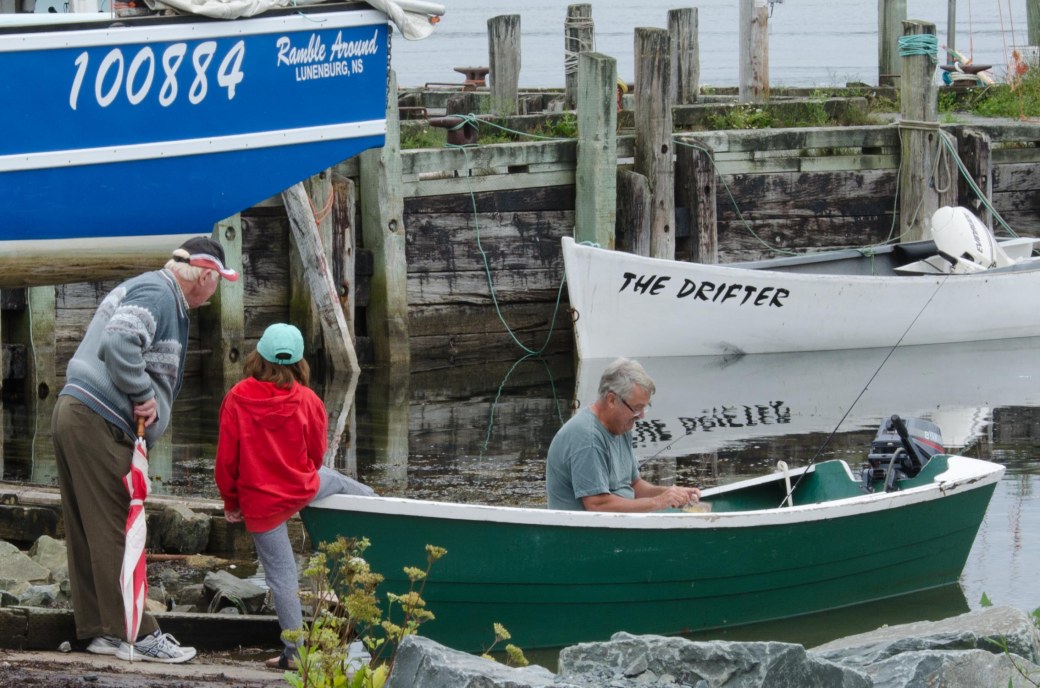 This was a quiet day, a rest day when we didn’t want to do much driving and wanted to avoid crowded areas. Kind of a holiday from our holiday. We drove down the west side of the LaHave River on the southern shore of Nova Scotia to get to the ocean and possibly Liverpool although that would be a long drive. We came to the small village of LaHave and saw a bakery with the porch lined with people eating what I knew were really good baked goods and a lineup at the counter inside. It was about noon and there were cars on both sides of the narrow road for a very long ways so there was nowhere to park. JB later saw a sign advertising a chowder dinner on this day in LaHave – we didn’t stop for either.

We drove through the village of Dublin Shore and saw a sign for Crescent Beach with an arrow pointing left. I pulled in and to the right was a road descending to a boat launch and small harbor. Lobster trapping goes from November to April so not a lot was going on. Just a grandpa preparing fishing poles, supervised by great-grandpa with an umbrella used as a cane until it rained. And there was also a man polishing his Caterpillar backhoe, an unusual sight. 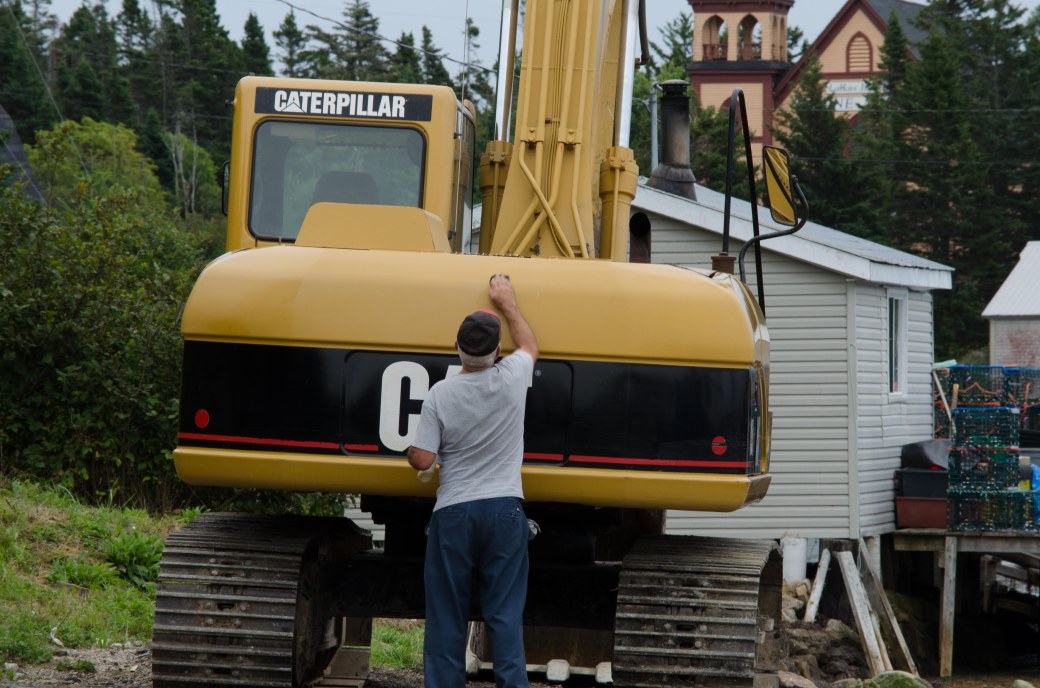 A dump truck drove in and backed up beside me – waiting for the small car to move, driven by the grandma dropping off the two kids who were going fishing with grandpa. They had just tore down a fish processing building and the dump truck was bringing in fill, that the backhoe was spreading to fill the resulting hole.

Although the skies were grey it felt like a perfect morning as I strolled down the dock and JB talked to the Cat man. There was a cool freshness coming from the water and I had on jeans and a sweatshirt. I felt the gentleness of Fall in the air. And I had my camera. Ahhhh. 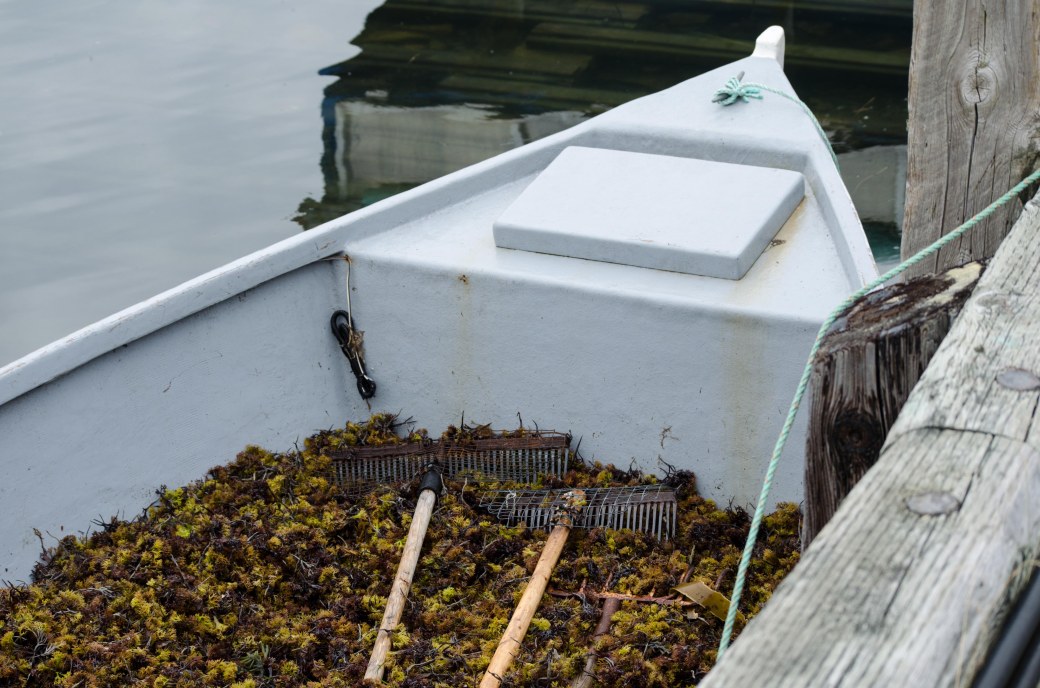 I noticed someone has been harvesting seaweed. I wouldn’t have noticed if I hadn’t watched them harvesting on the south shore of Prince Edward Island. 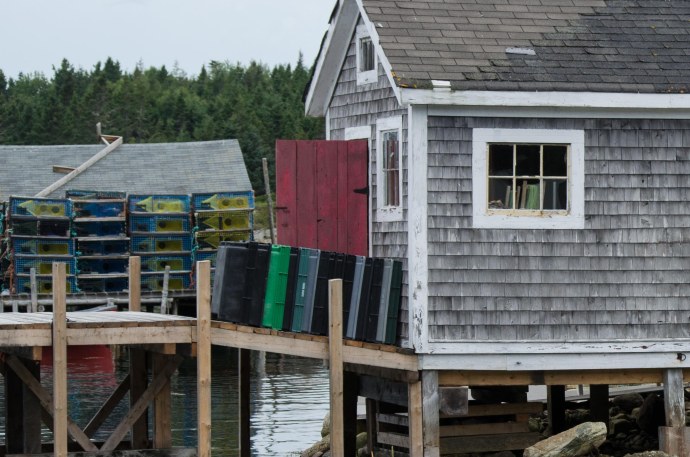 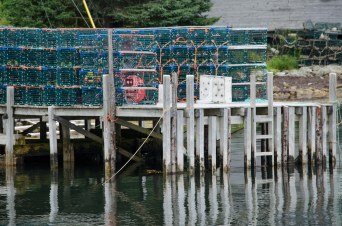 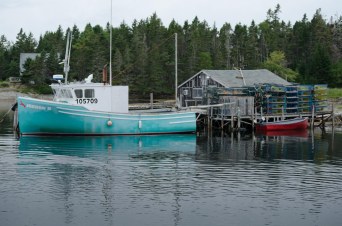 We weren’t in a hurry so we lingered. I don’t like the idea of lobsters being caught and boiled alive, maybe that’s one of the reasons I don’t eat lobster. I don’t like the idea of people making money from growing tobacco so I don’t smoke. It seems like most everything we consume is produced by business people who are making money through some sort of exploitation of the environment or people. It has become an existential problem for me that I delve into when I have the energy to ponder such deep subjects. In the mean time I take pleasure in photographing lobster boats and pots in Nova Scotia, and tobacco barns in Kentucky.

On the Maritime Provinces of Canada a primary industry is fishing and this is how people sustain themselves. They have always lived off the sea and they continue to do so; a hard life that I respect and am intrigued by. But time to move on to see what surprises Crescent Beach holds.