When in Trinidad we stopped at a government-run pottery shop. All tours originating in the U.S. to Cuba are required to be licensed by the United States Department of the Treasury, Office of Foreign Assets Control (OFAC), CFR 515.565(b) to meet the definition of educational “people-to-people interactions” to learn Cuban culture. All the tour companies have similar itineraries and they state very clearly that travelers need to participate in all scheduled events. I think visiting this shop was one of those “required stops” to allow us people-to-people contact and to learn about Cuban crafts and art. Because of this, I assumed it would be like the “tourist traps” found wherever tourists like to go.

Like most of my prior assumptions, it was wrong. This was a working pottery shop allowing us to see where production took place and allowing us to watch the artists use their skills to produce some really nice pottery. 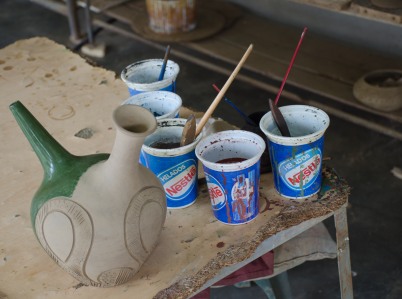 We were free to wander around the small shop, including outside where the more technical aspects take place.

After I poked around and took some photos of how the pottery was made, I was ready to go back to the showroom to see some finished products. 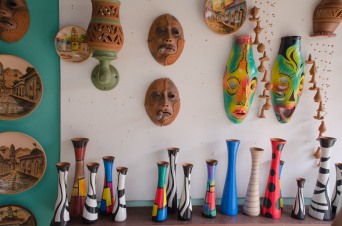 I found a vase that I really liked and someone else liked one of the tea pots. I thought a long time, but ended up not buying the one I wanted because it was early in our trip and we were concerned about whether we would have enough money. The greatest hardship for us was that there are no ways to get money from U.S. banks or credit cards. Before we left for Cuba we had to decide how much we would need without understanding how much we would want given our conservative spending habits and then had to budget not knowing how much we would need in Havana – which we assumed would be more expensive. We carried both U.S. and Canadian dollars and used both depending on what exchanges we used. As we oriented ourselves to the exchanges, we learned new things that aren’t told in published information because people are trying to make a living in ways that probably aren’t above board. It definitely helps to have a knowledgeable tour guide – and we ended up taking money home.

I believe I learn about their people and culture by visiting these places where people demonstrated their crafts and the aesthetic sentiments of the people. I believe that the arts and crafts of a culture are on a very messy continuum, maybe not even an either/or continuum. Both require some degree of creativity and some degree of technical skill, both created for varying degrees of aesthetic and functional reasons. This post was in response to the Daily Prompt of Craft. Maybe my next post will be on art in Cuba.

You can read about how we found the wonderful travel company we used and the design of this custom tour at my post Cuba: Traveling on the Edge. You can find information about the travel agency we used with this link: Positive Things and Destinations. I receive no compensation for referrals, I provide the link because we trust the owners and had such a good experience.