Just north of Frankfort and west of Traverse City in Michigan,  on the shore of Lake Michigan, is the Point Betsie Lighthouse. I’ve been there several times over the years because friends have a cottage on the Betsie River and we used to visit them there when they were younger. We have also camped in this area. Visiting the lighthouse gives me the joy of visiting the familiar, even though the familiar has changed, for real or maybe because I’ve changed.

There are a lot of lighthouses on the Great Lakes and they fascinate me. There is a romance about them – maybe they trigger that longing deep within me, calling me to a rugged life – at least when I was younger and had more tolerance for simpler but harder living. I think it is filed with the fantasies from when I was a girl; to live in a log cabin in the deep forest, or a mud hut on the frontier. Those fantasy where I bake bread and hang gingham curtains in the windows.

Our visited this year was on a calm day, when the waves were gently lapping the rocky shore. But my mind can imagine the fierce fall and winter storms, probably fueled by stories of ship wrecks, men lost to the cold depths. The breakers filled with large rocks designed to slow down shore erosion also support my image of the fierceness of storms. I have seen how huge waves form ice on everything before the water freezes along the shore and how large blocks of ice push themselves upon the shores. 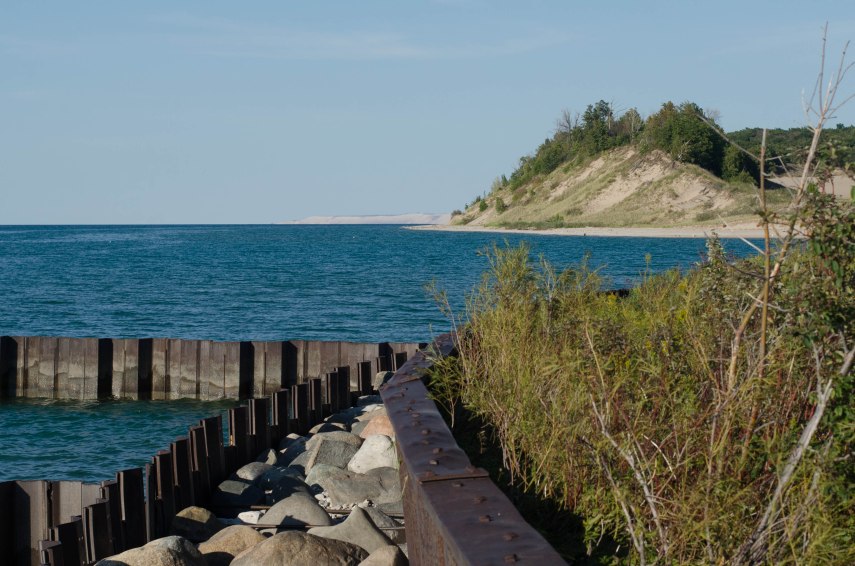 The dune in the foreground and the white along the horizon that looks like a glacier is the Sleeping Bear Dunes National Lakeshore.

I often wonder what it would have been like living in a lighthouse, knowing that lives depended on the keeper keeping the light fueled at all times. And knowing that the light mattered most as the weather became worse – those cold, blustery nights when I want to hunker down under a warm quilt. 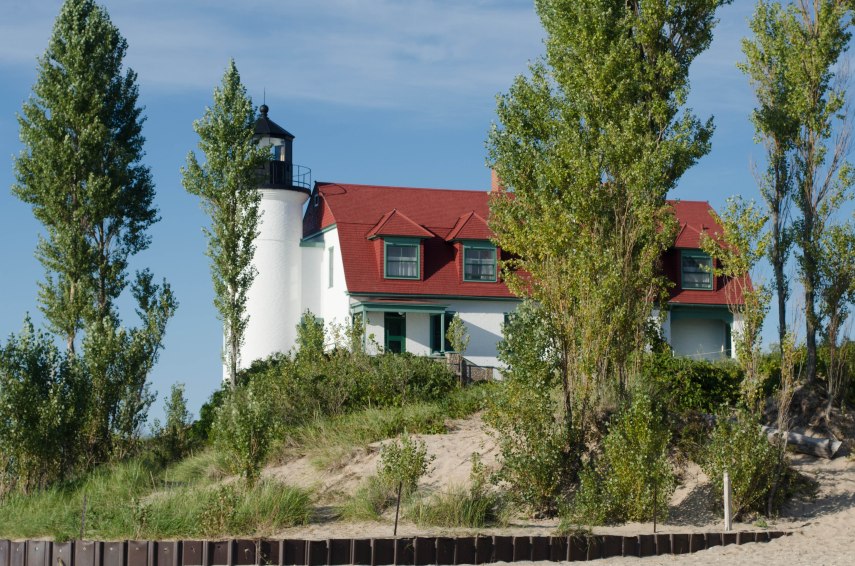 Now the lights are electric and modernized so they don’t need 24/7 attention. And many of the lighthouses that we have visited also have fog horns.

Many of the lighthouses on the Great Lakes have tours, and you can even book vacations in an apartment at this lighthouse. There are tours of this lighthouse and I’ve toured others. In my aging years I have not chosen to tour them because there are a lot of steps and I’ve shifted my joys to taking photographs of the outsides and surrounding landscapes. Maybe I want to protect my early fantasies from the corruption of too much reality. I believe facts are very important but this seems a safe area to relax that value a little bit. Maybe it is also adapting to what my aging body can safely do.