We were on a short dirt road between nowhere and nowhere else. At least that is what it seemed like to us. We enjoy exploring these back roads, especially when we are far from home and everyday life seems so different. We are beginning the Circle Tour of Lake Superior and are on the east end above Sault Ste. Marie, Canada. We have only been here once before – a long time ago and that was just a quick drive through. This time we have no urgent reason to get home on a specific day so we are staying more nights at each stop.

The paved road we turned on, off highway 17, ended a short distance away at the water’s edge, at a boat launch. We lingered a while taking in the quiet. Going back we turned down a dirt road with a sign pointing toward a lake shore resort. It was a small resort that bills itself as “A slice of Austria on Lake Superior.”

On this dirt road, going to the slice of Austria, I had noticed a small cemetery, on a cliff between the water and the road. On our way back I told JB to turn in and we drove down a short bumpy lane to where the markers were.

I had said that this was a road between nowhere and nowhere else. This isn’t true. This has been, and is a place of significance for many people for a long time. This is home to the Batchawana First Nation people. There were several homes along the paved road and some evidence that people had established small businesses. But there isn’t much opportunity for employment close by so we could tell it is a poor community, at least from our capitalistic, consumer perspective. Maybe they don’t value “things” so their perspective of “rich” is entirely different. Maybe they value family, community, nature and only feel poor when they come in contact with the dominate values. I would love to move in and get to know them better.

We do know their grief because we lingered in their cemetery. I worried about violating their spiritual space, but I think it may have been okay because I felt a lot of reverence as I walked around and both JB and I felt their grief. JB noticed that most of those buried here were children and young adults – there were only two who were older than 60. 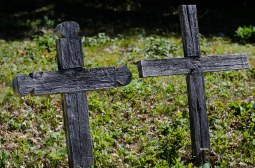 Most of the grave markers were wooden crosses, although there were some that were white stone. There was one that was made of cement. We had just visited the graves of JB’s ancestors in Owen Sound and both of us were struck by the difference between the expensive stone markers to honor the dead and the humble ways the dead were honored here. Could there be a “richer” statement of grief in burying a beloved child than this. It leads me to question the purpose of our very expensive burial system.

I have never lost a child that I had held and nurtured, and I can’t comprehend the pain. But these parents lost five young children over a series of years in the late 1800’s. It was almost a yearly occurrence to bury a child. How do you think they coped with it? 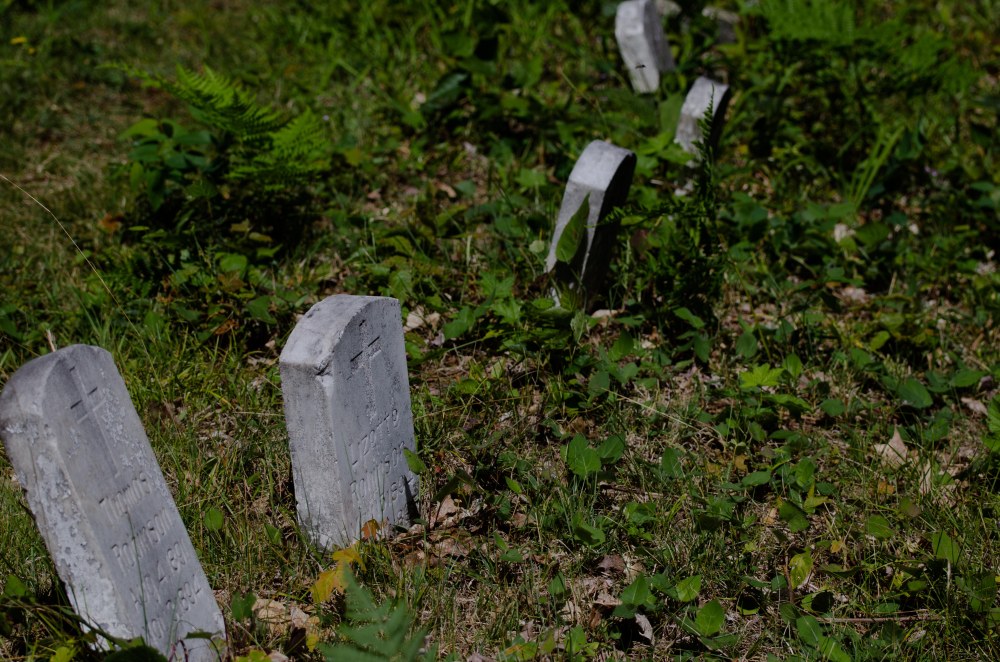 Yes, this is a community that grieves the loss of their own, together – and listens to the spirits of their ancestors in this sacred place. Don’t we all know who we are by remembering who has touched us and left?