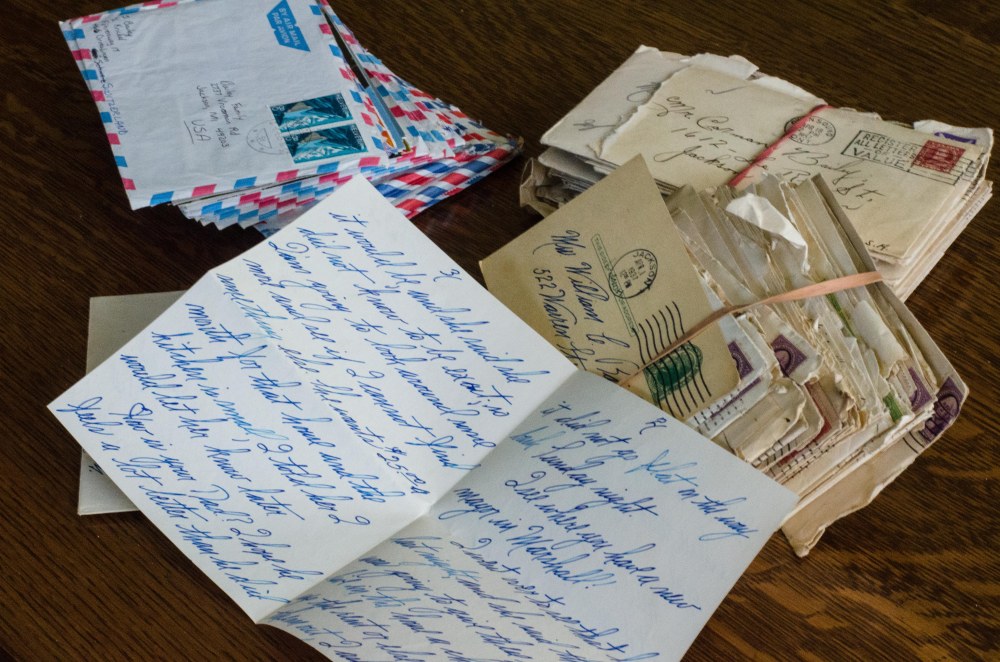 In that drawer in the bedroom where we put things that are dear to us, we have three stacks of letters. One stack is from our oldest daughter, our second child, written when she was 17 and living in Switzerland for a year. It was so very hard having her so very far away, before Skype, internet, and inexpensive overseas calls – or was it before we could afford overseas calls. We missed her and looked forward to her long letters describing her experiences in a foreign land, speaking a foreign language, and going to school. Through her letters and photos she introduced us to her new family, the one she still visits yearly. I haven’t read these letters since she returned home and then left again, and again, and many times again. I started reading them today, and couldn’t stop. What a treasure they are. She hasn’t read them since she mailed them – maybe she will soon, or someday.

The other two stacks were written by J’s mother and father in 1936-37. Bill was an immigrant from Canada, living and working in Jackson. Mary was a widow in her early 20’s, dirt poor (this was before there was government help for widows or children living in poverty), with three very young children, trying to survive the depression. She lived 35 miles away in Marshall. They met, fell in love, and until they married a year later, they communicated with letters during the week, eagerly waiting for Bill’s visits on week-ends.

After they married, they continued to live apart while Bill looked for a home for his new family. After they were united in Jackson, Bill adopted the three children and loved them as his own. Six years later, Mary was surprised to find she was pregnant; and J was born to them.

I grew to love them for many reasons. but it was Bill’s willingness to love and provide for the three children that touches me most. They continued to live apart after they married because it took Bill several months to find a house for his new family. In those months apart, they didn’t pick up the phone for a long-distance chit-chat, they wrote a letter.

Just now got home from work and am going to write to you before I sit down to supper.

I see where you have a new mayor in Marshall!

I went over to see that lady last night, and she said that she was going to give these people that live in the house a chance to pay up the rent or else she would get them out. I asked her how long it would be, and she said she did not know to be exact; so I’m going to look around some more and see if I cannot find something else. She wants $25.00 a month for that house and the kitchen is small, I told her I would let her know later.

How is your Dad? I hope he feels a lot better than he did. How are our kids? Tell them I will see them Friday and to be good.

Well Dear I have about run out of news, so I will mail this so as you can get it Wednesday. Will see you Friday night. Lots of love to you and the children.

Will our internet communication provide us with the same sense of intimacy that these types of letter provide? As I was reading the letters written by Bill & Mary, I felt like I was intruding into something very special and private – even though they have been dead many years. They were written in their handwriting with unique phrasing that helped me remember their personalities. These stacks of letters will be saved as an important window into our family’s story.

You can see of all kinds of letters by visiting: