I did it! My daughter was living in Biskek, Kyrgyzstan (see map link at bottom) working at the University of Central Asia in 2009 and I wanted to visit her while she was there. Kyrgyzstan is pretty much off the typical tourist map and I didn’t think it was somewhere I would ever be able to go again. My husband didn’t want to go because he doesn’t have much tolerance for not having a bathroom off his bedroom. Sharon was eager to have me come and I knew we would have fun together because we had traveled to St. Petersburg Russia in 2004.

My first posts on Kyrgyzstan will be about our most amazing trek to the mountain pasture around Son Kul. This mountain pasture is high up (9,895 ft. above sea level) and surrounded by mountains. It is almost as if the pasture was too big to fit down into the bottom so it is wedged high up. The Kyrgyz word for lake is kul, and you can see Son Kul as the light strip in the upper left corner of the above picture. It is the second largest lake in Kyrgyzstan and it is big – the plateau is big,  the mountains are big, and I felt very small.

It was June and our driver wasn’t sure the mountain pass to Son Kul would be open but locals told him it was. Sharon & I are in the back seat of this 4-wheel-drive van with a Russian driver (who should have more fear) and a Kyrgyz guide (who should know more English). It had been a long time since this road was graded and I kept thinking, “Oh my Lord, my body is going to hurt so much after this ride.” Then I would yell, “You can’t get through there – jez, Valodi, you got through there!” And he would laugh.

Son Kul is a working pasture: every spring people from surrounding regions drive their herds through the passes so their livestock(horses, cows, sheep, goats) have greener pastures. Horses have historically been very important in the Kyrgyz culture. The lower areas, where these people live in villages, have very dry summers because Kyrgyzstan is an arid country. Historically the Kyrgyz, one of the world’s oldest distinct nationalities, have been nomadic people moving from pastureland to pastureland.  Many people still live this lifestyle, staying in the villages during the cold winters but moving into the higher elavations in the summer

We had reservations to sleep in a yurt, the dwelling place of the families when they move to the pastures. However, there are no road signs, in fact the roads are only one-lane paths, and our driver couldn’t find the family that was providing our B & B. They tried calling the office but couldn’t get a cell-phone signal – even when standing on the roof of the van. This was early in the season and there weren’t many families but our guide found us lodging with the family that owned this set of yuts. The van with the side view was transporting a group of bird-watchers from the Netherlands. 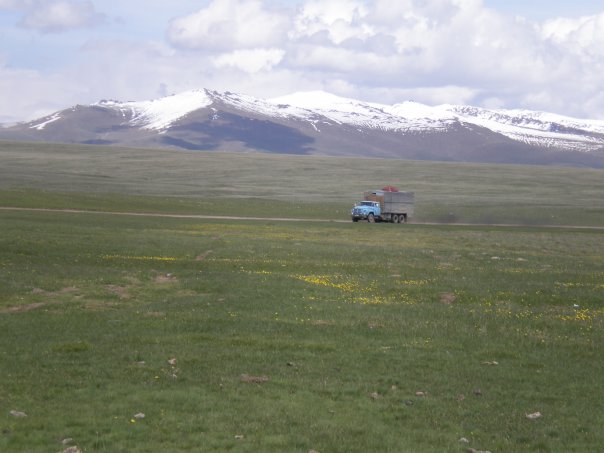 I titled this picture “Moving Day” because this is the vehicle that families rent to bring their summer belongings to the mountain pastures. We passed a trucks on the way up with people hanging off every runningboard and a baby goat riding in the far back. I think you can tell from the pictures that this is living a step down from primitive camping. There is no electricity or running water. They carry their water in containers from the lake & the streams carrying mountain run-off. We didn’t drink it.

We reached our B&B mid- to late afternoon so Sharon & I decided to take a little walk to see the sights and people watch. The sights were the wild flowers growing abundantly but subtly beneath our feet (buttercups? and edelweiss). The people included a father & a son (of 12 or 13) talking and laughing together as they carried water back to our B&B for preparing the supper meal.

The altitude is high (close to 10,000 feet) and we became winded very quickly. Our pace became slow but that was okay because there wasn’t anywhere for us to go – except the present. What a magnificent present to be in.

Note on living with fibromyalgia: By this time I had stablized my symptoms and didn’t feel like FM was controlling my life. I was living life and just happened to also have FM. That didn’t mean that I could ignore the FM. I made sure I took medications on time, I had back-ups if I had a flare, and I said no to doing some things along the way because I knew it would put too much stress on my body. I also worked with my doctor to prepare for the trip. The trip from Detroit to Bishkek was close to 24 hours long, going through Paris and Istanbul, arriving in Bishkek at 4:00 a.m. He asked my to bring him a schedule of my flights and layovers, using Eastern Standard time so he could help me figure out when was the best time to take medications and when I could use a short-acting sleep aid. He told me how to take care of myself once I was there and when I returned. I also had a lot of adrenaline to help me and determination up the wazoo.

My next blog will cover “A B&B Yurt”, followed by “How to Milk a Mare.”

Some of the above information was obtained from “Kyrgyzstan: Travel Guide” published by Discovery, http://www.centralasia.travel

Excerpts and links may be used, but please give credit to me, Patricia A. Bailey and provide a link to http://imissmetoo.me  All pictures were taken by the author and I would appreciate credit if you use them.